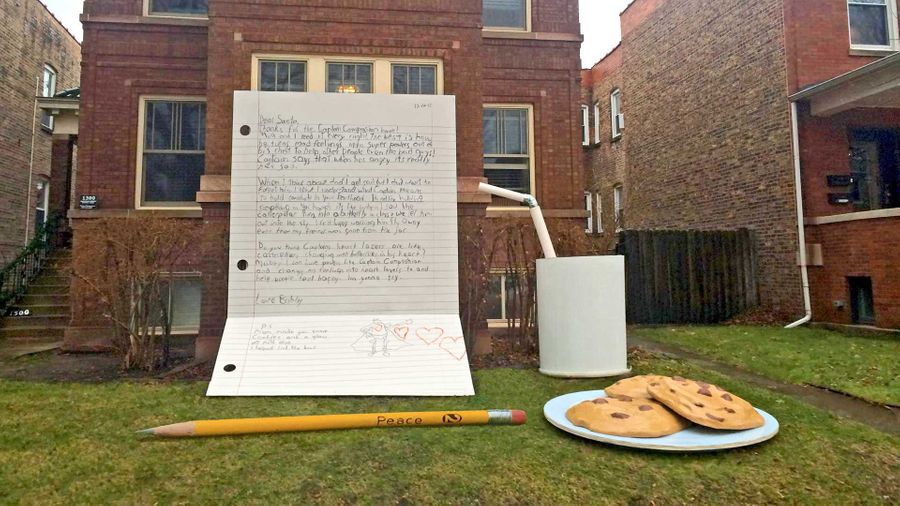 Thanks for the Captain Compassion book. Mom and i read it every night. The best is how he turns mad feeling into super powers out of his chest to help other people, even the bad guys. Captain says when he’s angry it's really he’s sad. When i think about dad I get sad but i don’t want to forget him. I think I understand what Captain means to hold somebody in your heart. Its not like holding something in your hands. Its like when i saw the butterfly in class and we let him out into the sky. I felt happy watching him fly away even though my friend was gone from the jar. Do you think Captain’s heart lasers are like caterpillars changing into butterflies in his heart? Maybe i can have powers like Captain Compassion and change my feelings into heart lasers and help people feel happy too. I’m gonna try.

P.s. Mom made you some cookies and a glass of milk. I helped lick the bowl.

The 2015 letter is dedicated to children who didn’t get to live out their lives. They are people we've known and people who we've met through our project who've impacted us deeply. My compassion for them and for their parents never dims.

Colin was a friend at a time when I was struggling to connect with friends. We would visit each other’s art studios after I’d just been broken up with by the love of my life. My mother was in the ER abroad with life-threatening bleeding and I often sat quietly in Colin’s company when we had no words to express our angst. Something about our mutual pain was comforting even if we didn’t use words to process what we were feeling. I moved to Oklahoma that next year to take care of my mom and then I moved to Chicago and opened up an art gallery.

In late March of 2005, when Colin was 29 years old, he walked into my gallery with his young son perched on his shoulders, holding his ears like handlebars. His eyes welled up as he expressed his condolences. I wasn’t sure why he was so moved. I recall wondering if he had lost his mother, too, or if he had something else going on. But I felt a great wave of compassion and support from my old friend. A few months later, Colin passed away. I met his mother at his memorial, where we connected and processed our grief together. We continue to be friends to this day and I want to honor her and memorialize Colin through our 2015 letter.

Last year, we received a “Letter to Bobby” from a mother whose son had taken his life when he was 29 years old. She missed him terribly but was grateful for the memories that surfaced when she read the letter. I kept an eye out for a woman named Erin, so that I might connect and share my heart back but I couldn’t find her.

On the first day of April 2022, a month that is very painful for me on a personal level (my mother’s death month) I was walking along the lake when I saw a friend I’d not seen in a many years. She introduced me to a woman named Erin. I perked up and wondered if it was possible that I’d found the Erin I’d been searching for. Then my friend introduced us as the women who do the Giant Letter project. She perked up too, and I could feel that it was her, but I wanted to be sure. “Is there any chance you are the Erin who wrote to Bobby’s mailbox?”

When she said yes, we both began to tear up. I asked if I could hug her. It meant everything to me to get to recognize that the words she had written months prior had not fallen upon deaf ears.

As I hugged her, I felt the familiar complete circuit I often feel when I meet a mother who has lost a child. There’s this unspoken connection there between children who have lost parents prematurely and parents who have lost children. We are bridges to each other healing and I always honor the completion of those healing circuits.

You can learn more about Lucas here and in the following note from his mother.

"My son, Lucas, and I were very close, and shared many good times. But even if Lucas had not been my son, I would have recognized what a special person he was. He was kind, intelligent, funny, and awesomely creative. He was a seeker who asked questions all his life. Lucas taught me so much, and when I commune with his spirit now, I continue to learn from him.

These are some of my favorite images."

I.H — a child I never met, but whose parents changed my life for the better. I will forever hold a place in my heart for them and for their little girls who lost a sister.