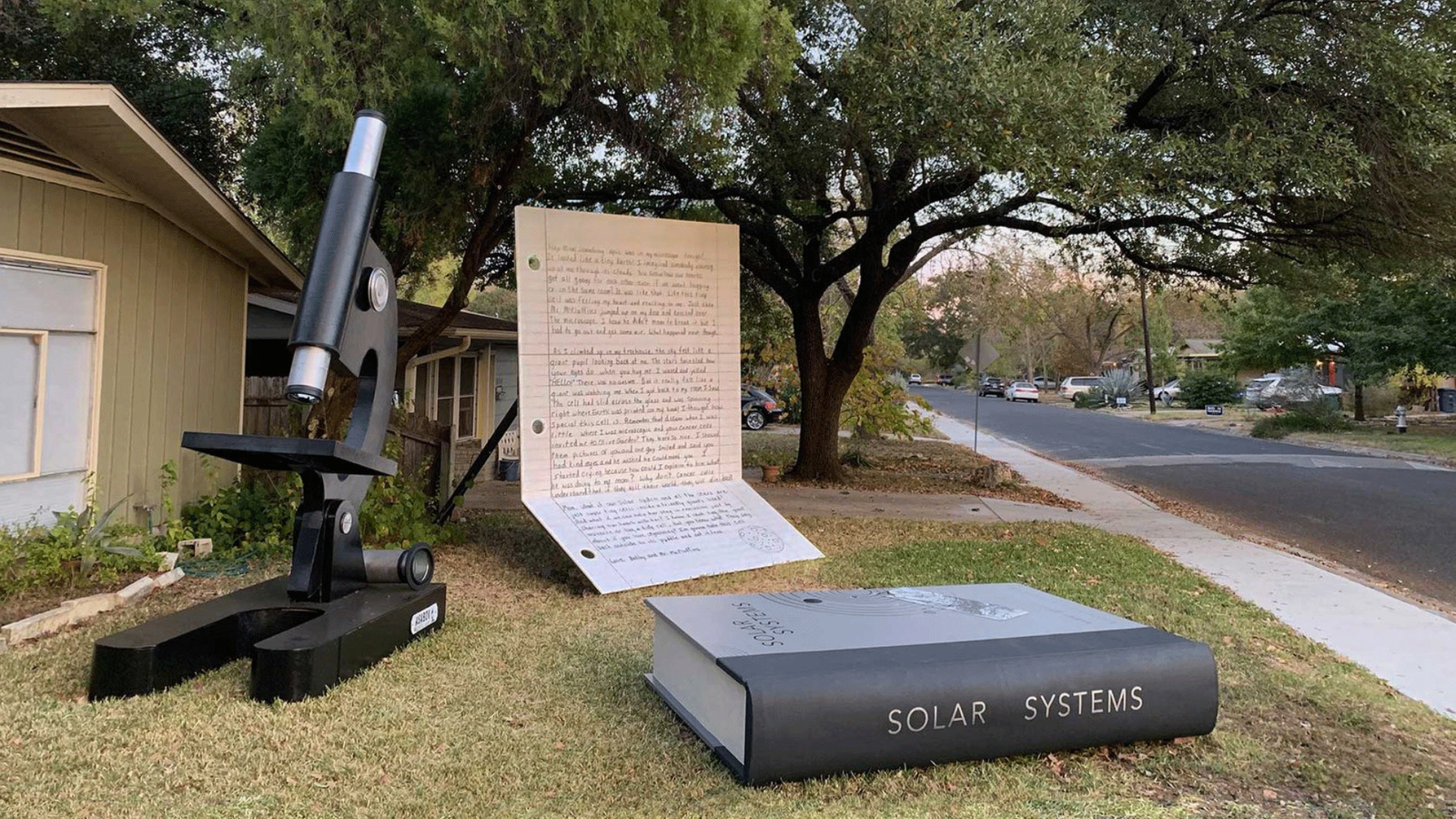 Something epic was in my microscope tonight. It looked like a tiny Earth! I imagined somebody waving up at me through its clouds. You know how our hearts get all gooey for each other even if we aren’t hugging or in the same room? It was like that. Like this tiny cell was feeling my heart and reacting to me. Just then Mr. McFluffins jumped up on my desk and knocked over the microscope. I know he didn’t mean to break it but I had to go out and get some air. What happened next though…

As I climbed up in my treehouse, the sky felt like a giant pupil looking back at me. The stars twinkled how your eyes glisten when you hug me. I waved and yelled hello! There was no answer. But it really felt like a giant was watching me. When I got back to my room I saw the cell had slid across the glass and was spinning right where Earth was printed on my book! I thought how special this cell is. Remember that dream when I was little, where I was microscopic and your cancer cells invited me to Olive Garden? They were so nice. I showed them pictures of you and one guy smiled and said you had kind eyes and he wished he could meet you. I started crying because how could I explain to him what he was doing to my mom? Why don’t cancer cells understand that if they kill their world, they will die too?”

Mom, what if our solar system and all the stars are just super tiny cells inside a friendly giant’s head? And what if we can help her stay in remission just by sharing our heart with her? I know I can’t hug the giant universe or hug a tiny cell, but you know what they say about if you love something? I’m gonna take this cell back outside to its puddle and set it free.

Marj and I met Ben’s daughter, Addie when she and her mother came to our house to see the 2020 Giant Letter. Addie’s grief was palpable as she approached us to share that she had lost her father the year prior and that she felt so grateful for the emotional moment our project had offered her to connect with her grief. She pointed to the book’s author, “Avery Baudy” and said that the name was very special to her. Addie then wrote a story about our installation for the Austin American Statesman’s “360”. Through our interactions, we learned that Addie does Ancestral Tarot reading, which is reading cards based on sharing family stories and values. As the practice is less about predictions and more about personal reflection, I find it to be a very impactful type of healing work for people who struggle to process emotions.

I feel that our paths crossing has brought Giant Letter to a new level and I will always feel grateful for her kindness in all ways.

Kim was a neighbor who became a friend when I lived in Edgewater. Her youngest son helped us with a sketch for a video for our 2015 letter. And her older son helped us build our 2021 Giant Letter. I was aware through the years that Kim’s parents, Michael and Diane Wagner, we’re both struggling with health issues. Her mother was diagnosed with dementia around the time I left Edgewater. I’ve watched Kim process the pain of losing two parents within a year and, using our project, wanted to honor them both. Kim told me that her mother was a huge fan of the arts and had decided to go back to school to study art at the age of 50. I am so honored to get to dedicate this letter to her and to Kim’s dad.

Nancy was a colorful elder character who lived on our street in Edgewater. She struggled with her mental health and took a turn for the worse in 2020. Our teammate, Laura, who continued to visit our old neighborhood after we moved, became friends – eventually becoming Nancy’s main support system as she navigated the difficulties of hospital visits, and procedures that lead up to her final decline. Laura was at her side the whole time when Nancy entered into hospice care and passed away. We’d like to dedicate this letter, in part to Nancy.