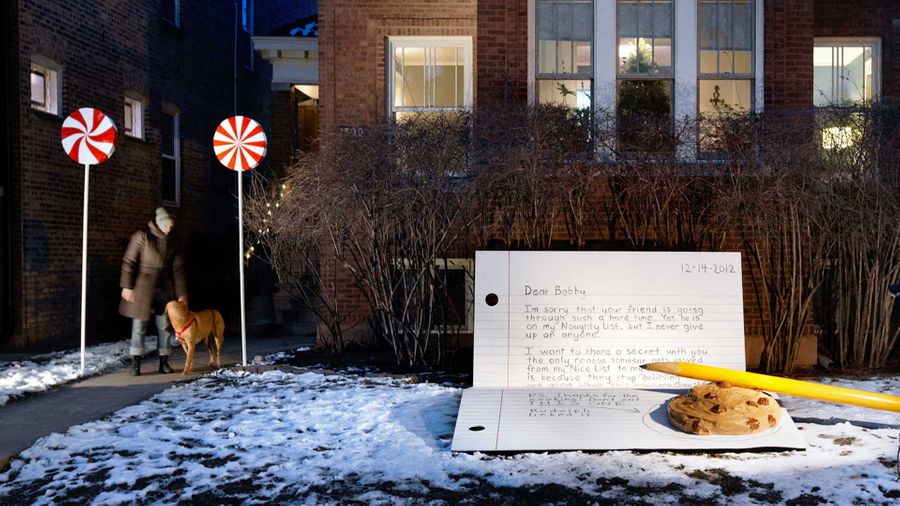 I’m sorry that your friend is going through such a hard time. Yes he is on my on my naughty list but I never give up on anyone. I want to share a secret with you. The only reason someone gets moved from my nice list to my naughty list is because they stop believing they are good. When this happens they stop caring and the naughty seeps in. He’ll be ok, just be his friend and help him remember he’s good. Thank you for your Christmas spirit Bobby, and for keeping an open heart. I know it's hard work. There will be a special present under the tree for you this year.

P.S. Thanks for the cookies, but don’t eat this one. Rudolf licked it.

In 2011, I learned that my 7th grade bully had been murdered. He was found bound and burning in a ditch. Nobody seemed to notice, including myself, that Greg was missing for close to a decade before his remains were identified.

I was eighteen – a freshman in college – when Greg tracked me down in my dorm. We went to a party, then stayed up talking for hours. He opened up about his strained relationship with a family member. It was evident that he needed validation from this figure, and that Greg felt pressure to succeed in ways he didn’t feel capable. He apologized for hurting me all those years ago when we were kids. In his vulnerability, he admitted that he had an addiction to prank-pulling and pushing people over the edge. He felt remorse and wasn’t sure how to process it. Giving him the space to come to terms with how he hurt me and others was a gift for both of us, and I'm glad that he knew that he was forgiven. I never saw him again. Eight years later, he would be gone.

I was 12, at my first school football game in a new town, when I first encountered Greg. I hadn’t met him yet when he walked up to me on the bleachers and kicked me square in the head. I hadn’t seen him coming, so I wasn’t sure how I ended up sideways or why my eyesight had gone out. Despite his behavior, I had compassion for Greg. On a subconscious level I recognized the self-hate he housed. I recognized it because I housed a heavy load of self-hate, too. I think that we both felt that we deserved to be hurt.

A few months after learning about Greg's murder I also stumbled upon a news story about 13-year-old boy, Cade Poulos, who had taken his life in the halls of my junior high school. Walking those halls, two decades earlier, I had also contemplated ending my life. I had a teacher those two years, Judy Ramsey, who saw me. She began to challenge me to write fiction. She made bets with me about my spelling tests and I made my first A's. My stories were disturbed but she didn't judge the content. She just urged me to keep writing. At the end of the year, she wrote in my yearbook, "please keep writing and don't give up". I often wonder if she had known Cade and helped him too. One of my biggest wishes is that one day I can tell her in person how she saved my heart and gave my life direction and meaning.

In the end, the person I’m most grateful for is Greg. He helped me understand later in life, that most of my pain was from treating people badly. He inadvertently held up a mirror to show me that it wasn't as much the bullies, but my self-hate, that was doing me the most damage.

“Children learn violent behaviors in primary social groups, such as the family and peer groups, as well as observe it in their neighborhoods and in the community at large.” Source

A person’s environment either reinforces the reflex to violence or it helps them heal past it. We want to create a compassionate environment with Giant Letter -- a safe place for people who are suffering, to have a chance to heal rather than to perpetuate more abuse. Greg, and bullies like him, have the capacity to heal our society when they exercise their courage and sincerity. So our project begins with Greg's story -- a boy whose courage had the power to heal his victim after his death. Next >>